In a recent team culture workshop, we measured the team’s culture using the CTS (Circumplex Team Scan™). The culture – how people tend to behave towards each other – was reported by members as high on the culture style, Timid & Hesitant, and low on its opposite style, Courageous & Confident. 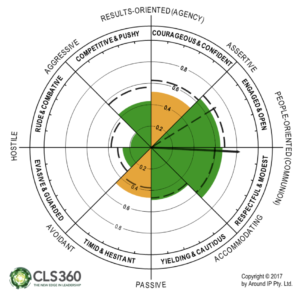 When describing the Timid & Hesitant culture, team members reported they anxiously avoided appearing assertive and ambitious, and they prefered to remain inconspicuous and follow the lead of others.

When describing the low Courageous & Confident culture, team members reported they failed to act boldly, decisively, and fearlessly, and they are uncomfortable being assertive and taking charge.

Initially, we were surprised by the culture result because the current team leader’s leadership style – as measured by the Cirumplex Leadership Scan (CLS360) – reported high Coaching and Participative leadership styles. See Leader #1. However, during the workshop, it was revealed that the previous manager had led the team with a very different style dominated by high levels of Authoritarian, Inspirational and Distrustful. So, how did the previous leader’s style create the team’s current culture? One important answer lies in emerging field of interpersonal theory and research.

Further, interpersonal researchers have discovered two important ways these opposite interact – Similarity and Complementarity, and these mechanisms can help explain how leadership impacts culture.

A brief explanation of Similarity and Complementarity:

Similarity works with the Communion meta-motive, and predicts that being Friendly to another person draws or elicits a similar response of Friendliness. This Similarity principle also predicts that Hostility will draw Hostility in return, something unfortunately, we see all too much of in our world today.

Complementarity works with the Agency meta-motive, but instead of drawing a similar response it draws the opposite reaction, thus, a leader’s Dominance draws Submission on the part of the other person. Most interestingly, Submission will draw Dominance from the other person in the relationship.

Getting back to our team example, it appears that the leader’s Hostile Dominance behaviour has contributed to the team’s Hostile Submission culture. Specifically, the team’s Timid & Hesitant culture is likely a ‘Complementarity’ response to the team leader’s Authoritarian style. Most concerning, is the Hostile ‘Similarity’ response producing what appears to be a Hostile Submissive response at the bottom left of the circumplex. Concerning, because the styles located here consistently correlate with poor performance, and can be seen in staff being disengaged or ‘presentee-ism’, and in extreme cases correlate with counter productive work behaviours, such as, theft, ‘white-anting’, and undermining of the leader. It will be fascinating to come back in 3-months time to visualise the new team leader’s impact on the culture and whether it has changed. Looking forward to updating you on progress.

Where to from here?

Register for our upcoming webinar. In this culture workshop Facilitator, Quentin Jones from Culutre Captial Group will answer some of the most commonly asked questions about culture and its impacts on business:

✔️ What is culture? How is it different to climate and engagement?

✔️ How to measure culture and assess its impacts on business performance?

✔️ How does culture get created, maintained and changed?

✔️ How do I unlock my culture’s potential?

This is a hands-on workshop. You will have the opportunity to analyse your organisation’s current and ideal cultures, identifying specific behaviours to focus on to improve performance.

We want you to finish this workshop with practical insights and actions to improve your culture and unlock its potential.