Employee engagement strategies ranging from the simple expression of thanks to offering a major incentive to take annual leave were presented at a HR roundtable discussion in Geelong.

The importance of having trusted leadership was also a point of interest for the more than 40 human resource managers and business leaders at the Harvest HR Roundtable on Wednesday. 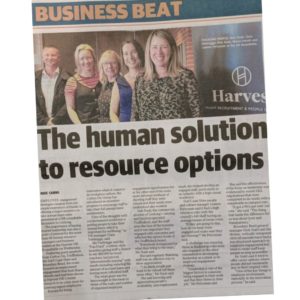 Featuring guest speakers from Cotton On, Truffleduck, the Surf Coast Shire and Boundary Bend, the even focused on employment engagement that host Maree Herath said had been shown in Harvest HR’s recent research to be a key issue for Geelong region employers

Known for being innovative when it comes to its workplace culture, the Cotton On Group has introduced an incentive program to encourage staff to take their full annual leave entitlements.

“One of the struggles with our permanent workforce is getting people to take their annual leave, which is important for wellbeing,” its HR manager, Clare Verbrugge, said.

Mr Verbrugge said the “Fun Fund”, a lottery-style incentive giving staff a chance to win $10,000 in travel vouchers had proved “phenomenally popular” with results including reducing the amount of accreued leave and having more refreshed staff.

The retail giant was the heavyweight in the room in terms of the scale and number of organised employee engagement opportunites, but at the other end of the scale, more informal methods of showing staff they were valued and their needs were understood also worked.

Deb Nash, the commercial director of Geelong’s catering and function specialist Truffleduck, said the staff were the face of the business and it was important they engaged with customers and reflected the service levels of the Truffleduck brand.

“Everybody is respected for what they bring to the team,” Ms Nash said

She said regularly thanking staff was an effective way to show appreciation.

“I do think people just want to be valued, tell them more often,” Ms Nash said.

She said knowing and appreciating people’s availability and employment needs also helped develop an engaged staff, particularly in an industry with a high casual workforce.

Surf Coast Shire people and culture manager Leanne Perryman said it had a high retention rate, with the council’s 440 staff having an average tenure of seven years.

“If they are going to stay, how do we keep them engaged and make sure they are thriving?” Ms Perryman said.

A challenge was ensuring those in leadership roles were also engaged, so the shire committed to developing leadership as a plank in its employee engagement strategy.

“Leadership is one of the biggest factors in someone being engaged in their work and that they thrive in their job,” Ms Perryman said.

She said the effectiveness of the focus on leadership was evidenced by recent EBA negotiations that were completed in six weeks with a remarkable acceptance rate.

“It got a 99.6 per cent ‘yes’ vote,” she said. “The think that made the difference for us was about trust and transparency.”

Mr Stahl said it tried to offer career options, where people did not necessarily stay in their original roles.

“One of the key things is employee involvement, especially in the innovation process,” he said.